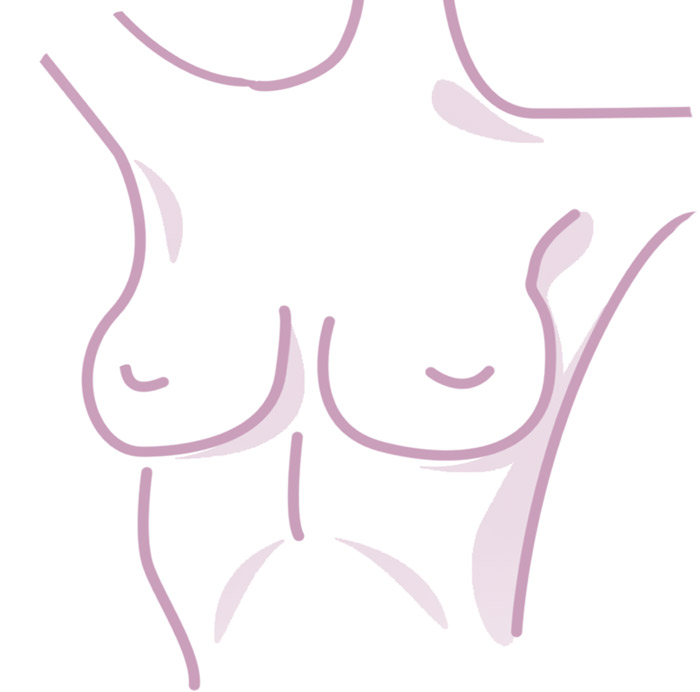 Most tumors that occur in the breast are benign, not cancerous, and are due to fibrocystic formations.

The cyst is a fluid-filled sac and fibrosis is an abnormal development of connective tissue. Fibrosis does not increase the risk of developing a tumor and does not require special treatment. The cysts, if large, can be painful. The removal of a spinal fluid usually take away the pain. The presence of one or more cysts does not favor the development of malignant tumors.

Benign tumors are related mostly to genetic factors. The symptoms that occur are pain and inflammation but not spread to the rest of the body and are dangerous.

In malignant tumors, various types depending on the location of the breast which they produce the abnormal growth of cells and by stage.

Tumors may be localized or have spread through the blood vessels or through lymph vessels, and have led to metastasize, a cancer in a distant organ to the original.

In all cases of breast cancer, only 7-10% of them presented metastasis initiation.

The treatment will be determined by the size of the tumor and whether there has been spread to lymph or other body areas. Usually, when the tumor is less than 1 centimeter in diameter, surgery enough to stop the cancer and chemotherapy is not required. However, there are few cases that do not require an adjunct to surgery or with chemotherapy or hormone therapy. Currently the most important prognostic factor remains the lymph node: the number of involved nodes help the oncologist to select further treatment.

The surgical procedure, performed by a surgeon / gynecologist expert in breast cancer, allows localdir disease control and carry out an accurate diagnosis because it can determine the characteristics of the tumor and the number of nodes involved by malignant cells.

In Spain are diagnosed each year 15,000 new cases and now it will lead figures indicating that one of every 16-18 Spanish have a breast cancer.

In the age group 45-55 years, breast cancer is the leading cause of cancer death in women in our country, ahead of lung cancer.

The cure rate in Spain is around 60%. In the case of relapse, the estimate of survival is about two 2 years of life, which means that in reality there are women with short survival (less than one year) and in other cases the figure is extended over four years.

Relapse in patients without lymph node involvement is 30%, while for those with affected this percentage varies depending on the number of nodes involved. If you have more than 10 nodes the relapse rate increases to 90%.

Early detection, when the tumor has not extended or changed, making the cure rate rises to almost 90%.

The American Cancer Society (ACS) estimates that each year are diagnosed in about 190,000 new cases of invasive breast cancer in the United States.

The five-year relative survival for U.S. women with localized breast cancer is currently 97%.

The mortality rates of breast cancer decreased from 1992 to 1996, probably due to better diagnoses and improved treatments.

In the early stages of breast cancer women often produces no symptoms. Breast pain is a sign of cancer although 10% of these patients so often present without any mass palpated.

The first sign is usually a lump, to touch, different note of the surrounding breast tissue. It is often noted with irregular, hard, and painless to the touch. Sometimes changes occur in color and tightness in the skin of the affected area.

Not all malignant tumors of this kind, as some have regular borders and are soft to the touch. For this reason, when any abnormality is detected you should consult your doctor.

In the early stages, the lump under the skin with your fingers can move. In later stages, the tumor is usually attached to the chest wall or overlying skin and does not shift. The nodule is usually clearly palpable and even the glands in the armpits may become larger. Symptoms of these stages are very varied and depend on the size and extent of the tumor.

Other signs that may occur:

– Irritation of the skin or fissures.

– Inflammation of a part of the breast.

– Redness or scaling of the skin or nipple.

– Discharge from the nipple than breast milk.

Be made after obtaining the biopsy result. With it, is to achieve total tumor removal. Depending on this, the surgery will be more or less complicated.

The breast-conserving surgery is to remove the tumor trying to preserve as much breast tissue intact. Depending on the size of the tumor have the following types of surgery:

Removal of the tumor with a rim of normal tissue.

Removal of the tumor along with a larger amount of normal tissue.

Removal of one quarter of the breast. These types of surgery will be performed in cases where the tumor is small, about 15% of cases, the amount of tissue that is removed is too small to notice much difference between the operated breast and non has been. Survival rates among women who have undergone surgery with conservative surgery and it was removed to a delamama all are identical. These are the options for radical surgery

It removes the entire breast tissue but leaves the underlying muscle intact and enough skin to cover the wound. The breast is reconstructed more easily if the pectoral muscles and other tissues that are below it are unaffected. This technique is used when the cancer is invasive and has spread within the breast ducts.

Removes the entire breast, axillary nodes some of the same arm of the breast and a small section of the pectoral muscle.

The removal of the tumor and the breast, underlying pectoral muscles and axillary nodes.

Depending on the size of the tumor, you can opt for technical centinela.Esta node technique involves injecting isotopes radiactivospara visualize the axillary lymphatic drainage. Through a scintigraphy of breast and armpit can observarel sentinel node, which is the first node in the lymphatic chain. Undergo removal of the sentinel node and performs a pathology in the same time of surgery. If the study is negative sentinel node is exclusively tumor excision without the need to remove lymph nodes in the armpit. It is expected the final histopathology, in 15-20% of cases subsequently detected lymph node involvement should therefore opt for a new practice surgery with axillary dissection.

It is a complication that occurs in one or two women out of 10 taking part. This complication is an inflammation, stiffness or pain and loss of mobility in the arm after lymph node removal. The woman, once operational, should avoid gaining weight with that arm and violent exercise. The treatment of this problem is through massage or compression bandages. It is making a new technique being studied, which consists of a liposuction to remove fat that is stored in the arm.

Usually, for reconstruction of the breast, the woman has to undergo surgery twice, once for the mastectomy and one for the implantation of the prosthesis. You can also opt for breast implant prostheses in the same surgical procedure. There is no inconvenience for the patient to intervene when it sees fit. The implant is usually silicone. Not all women who have undergone a radical mastectomy, they want to be a prosthetic implant. The fact prolong the operating time or going back to an operating room and undergoing anesthesia and surgery and subsequent recovery, some choose to make artificial prostheses.

(From Monday to Friday from 10am to 8pm)